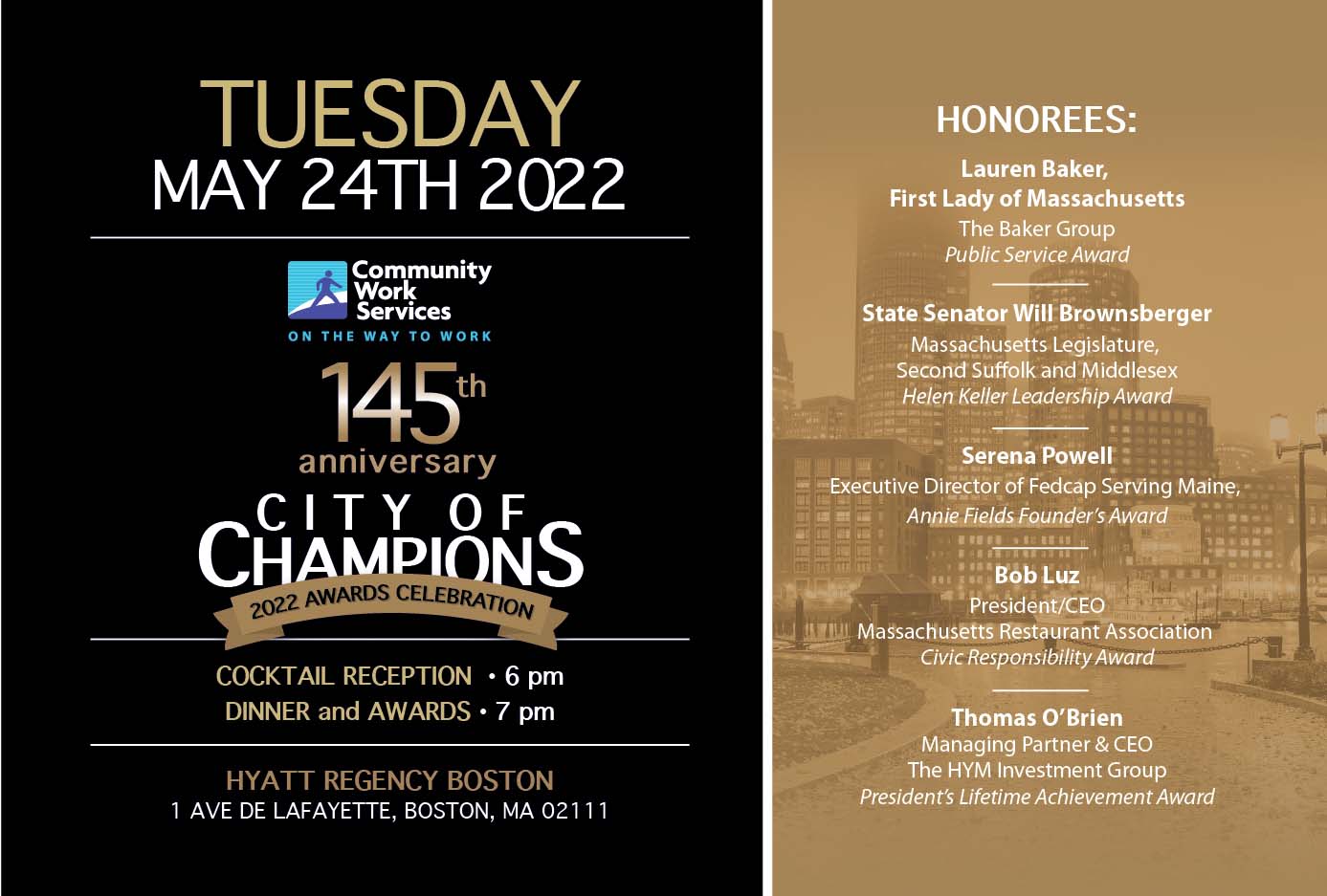 We are so excited that you are joining us to celebrate 145 years of service at our annual City of Champions Gala on May 24th at 6:00pm!

In addition, Ms. Tarantal is a contributing reporter for WCVB’s iconic local news magazine, Chronicle, and champions WCVB’s recurring “5 For Good” stories, the station’s ongoing effort to highlight people helping others in communities across Massachusetts. In 2017, Ms. Tarantal’s “5 for Good” story entitled “Food Truck Fighting Hunger” was awarded a prestigious national Gracie Award by The Alliance for Women in Media (AWM). The story profiled a local couple whose food truck, Daniel’s Table, serves up thousands of meals each week using proceeds from the cafe that they own in order to stamp out hunger in their hometown.

Ms. Tarantal came to WCVB from News 4 New York, NBC’s flagship station in New York City, where she anchored the weekend newscast and also was a primary fill-in co-anchor for WNBC’s weekday morning newscast, “Today in New York.” She has reported on major stories ranging from the death of Pope John Paul II and the election of Pope Benedict to hours of coverage during Superstorm Sandy and the tragic shootings in Newtown, CT.

Ms. Tarantal graduated from Connecticut College where she earned a bachelor’s degree in government.

Lauren Baker currently serves as the First Lady of the Commonwealth of Massachusetts alongside her husband, Governor Charlie Baker.

As First Lady, Ms. Baker works to improve the lives of the children of Massachusetts, focusing in particular on the children served by our Department of Children and Families through her work with the Wonderfund, a private, nonprofit that she helped launch.

Ms. Baker has also recognized the need to support the many non-profits that work so hard in the Commonwealth to improve the lives of individuals. She is responsible for several networking efforts including connecting CWS to Horizons of Homeless Children. This new partnership has led to a major expansion of CWS’s mission.

Her continued passion for service and social responsibility is evident through her commitment to a number of causes. As a Co-Founder of the Massachusetts Covid-19 Relief Fund, Lauren helped raise over $31 Million for statewide emergency humanitarian relief. The COVID Relief fund provided the initial funding for CWS’s “Double Impact Program.” Ms. Baker actively serves on the Regional Board of Directors for the American Red Cross of Massachusetts, the Wonderfund, Phoenix Charter Academy Foundation and The Care Institute.

Ms. Baker holds an undergraduate degree in English from Northwestern University and MBA from the Kellogg Graduate School of Management.

Will Brownsberger is the Senator from the Second Suffolk and Middlesex District of Massachusetts.

He is an experienced, independent, progressive Democrat committed for the long haul to building a future we can believe in. His primary areas of focus are justice, transportation, education and the environment. He played a leading role in both the criminal justice reforms of 2018 and the police reforms of 2020.

Senator Brownsberger’s experience outside of elected office includes working as a defense attorney in private practice, including in court appointed criminal defense for which he received the Liacos Award for Commitment to protecting the constitutional rights of criminal defendants. He was Associate Director for Public Policy, Division on Addictions, Harvard Medical School and served as Co-chair on Harvard’s Interdisciplinary Working Group on Drugs and Addictions.

Senator Brownsberger holds a JD from Harvard Law School and a BA from Harvard College. A native of Watertown, Massachusetts, he resides in Belmont with his wife. They have three daughters.

Starting her career at Morgan Memorial Goodwill Industries in Boston, Ms. Powell launched their workforce development services and several award-winning job training programs including the “First Step” program with TJX Companies for mothers on public benefits, which was commended by President Clinton and the National Welfare to Work Partnership.

Ms. Powell served as the Chief Executive Officer at Community Work Services, where she led the historic organization through rebranding and an expansion of their services model to include credentialed programs and serving more diverse populations including the previously incarcerated, homeless and parents on public benefits. Along with the Board of Directors, Ms. Powell joined Community Work Services with The Fedcap Group to expand the agency’s reach and amplify its services.

Serving on a variety of boards and committees focused on employment, Ms. Powell is past Vice President and Treasurer of the Massachusetts Council of Human Service Providers.

Bob Luz graduated with a Hospitality Management degree from UMASS Amherst, and started his career in restaurant operations for The Rusty Scupper in 1983, before leading Human Resources and Training for the Back Bay Restaurant Group and subsequently Applebee’s International, Inc. He then served as Chief Human Resource Officer for several organizations which through acquisitions eventually became American Blue Ribbon Holdings, parent company of seven brands with 800 restaurants, 34,000 employees and $1.4B in sales.

Since 2013, Mr. Luz has been President & CEO of the Massachusetts Restaurant Association (MRA), representing the best interest of the food and beverage industry across the state. There are 15,350 locations and the industry employs over 300,000 directly in those establishments within Massachusetts.

MRA partnered with CWS to support hundreds of justice-involved young people (18-24) through training, case management support, employment and apprenticeships in the restaurant and foodservice industry as part of the HOPES Grant funded by the National Restaurant Educational Foundation and the US Department of Labor.

Thomas N. O’Brien is the Chief Executive Officer of The HYM Investment Group, LLC. HYM is currently leading the development of over 20 million square feet of mixed-use development in Greater Boston, including the following notable and complex projects: Bulfinch Crossing (the redevelopment of the Government Center Garage), Suffolk Downs, and Welltower’s Balfour at Brookline.

Prior to HYM, Mr. O’Brien served as a Managing Partner for JPI, a national developer and owner of multifamily communities, and as a Managing Director in Boston and New York for Tishman Speyer, one of the world’s leading real estate firms. Mr. O’Brien also led the Boston Redevelopment Authority as its Director and Chief of Staff, overseeing the development of over 12 million square feet of projects in Boston, from 1994 to 2000. He has served as Chairman of The Greater Boston Real Estate Board and is Vice Chair of the Board of Overseers of The Anti-Defamation League of New England, which awarded O’Brien its Abraham Joshua Heschel Interfaith Relations Award in 2016. In 2011, Governor Deval Patrick appointed O’Brien to the Board of the Massachusetts Housing Finance Agency.

In 2016, Mayor Martin J. Walsh appointed Mr. O’Brien to the Board of Trustees of the Rose F. Kennedy Greenway Conservancy and he also serves as a Board Member of the Pine Street Inn as well as a Board Member of The Carroll School. Mr. O’Brien is a graduate of Brown University and Suffolk University Law School and is a member of the Massachusetts Bar.