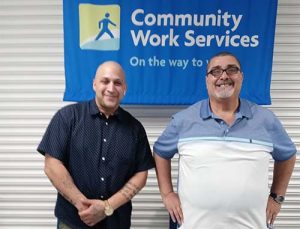 At Community Work Services, Matthew Kelleher found just what he needed, at just the right time—a mentor, a family-like atmosphere, and a sustainable job.

Growing up in Springfield, MA Matthew has seen a lot of violence in his life, and as a young man lived with the feeling that each day could be his last. After his older brother passed away in 2010, he fell into a cycle of drug abuse that would spiral out of control. “My brother was everything,” Matthew said. “I had two young kids and I wasn’t a father figure at all.”

Matthew was involved with the criminal justice system during those years, incarcerated for a time and sent to rehab programs. In early 2020 he relapsed during a visit to his hometown, MA, but this time he was hospitalized under a civil commitment order. Shortly after that he had what he called a spiritual awakening—he was “sick and tired of being sick and tired.”

“Something changed,” Matthew said. “I stopped worrying, stopped thinking about ways to get out of the program. I just did what I knew I needed to do.”

After leaving the hospital, while living in a halfway house and participating in recovery services, Matthew was referred to CWS. He met the trainers and team, and also Tim Muise. An inspiration to many, Tim, who serves as Program Coordinator for CWS, gave a speech that still resonates with Matthew—don’t let the past define you, and today is first day of the rest of your life.

Tim shared his own story about being a returning citizen—how after a lengthy prison sentence he came to CWS and today is not only the agency’s Program Director, but also an inspiration and mentor to others who may have made bad choices but are looking to turn their lives around.

“I was already motivated, but for him to say that he was showing me another person who has made it, who has turned their life around, it really challenged and motivated me even more,” Matthew said

Matthew will never forget August 30th 2021; it’s the day he began the commercial cleaning training program–and also enrolled in an online university program to earn a Bachelor of Arts degree in psychology. As he made the rounds during training and met just about everyone on the agency’s six floors, Matthew was struck by the fact that no matter where he went, it felt like family. “I saw how much everybody cared about us as people and participants.”

Even after his graduation from the Commercial Cleaning Program, Matthew still sought out the supportive, family-like atmosphere at CWS, returning each day to serve as a volunteer and to maintain his daily routine. Tim could see how serious Matthew was about changing his life, so when a position opened up for supervisor in CWS’ Commercial Production program, he offered Matthew the job. It was a wise choice.

“Matthew was an excellent trainee, and he took our program model to heart,” Tim said. “He has really good acumen with clients, can work with anyone, and he is a very gentle and kind person who wants people to succeed.”

“I snatched the job right up,” Matthew said, “I had a habit of limiting myself, and settling for things, but Tim helps me see you can do anything you want in life. Every day, he sends out awesome and encouraging emails.

As Supervisor of Commercial Production, Matthew had the opportunity to meet many participants in CWS programs, including many with disabilities, and it really opened his eyes. “To be able to help them, and to see how hard they want to work, I am speechless. Giving back to these great participants that’s why I wake up every day and I look forward to coming here.”

Matthew’s natural empathy and skilled ways of interacting with participants were recognized within the CWS family, and he was offered a job as Case Manager. “It’s awesome to be able to help guide people to the right direction in life, and help them get back into the workforce. At CWS they find your best qualities and make use of them.”